I’ve started working with the awesome project/app/site Loopcam and the first thing we did was to add 4chan sharing.

Read more over on the Loopcam /b/log and happy trolling!!!!!

I’m trying to finish the building of my first robot. More info when it’s up and running as intended! 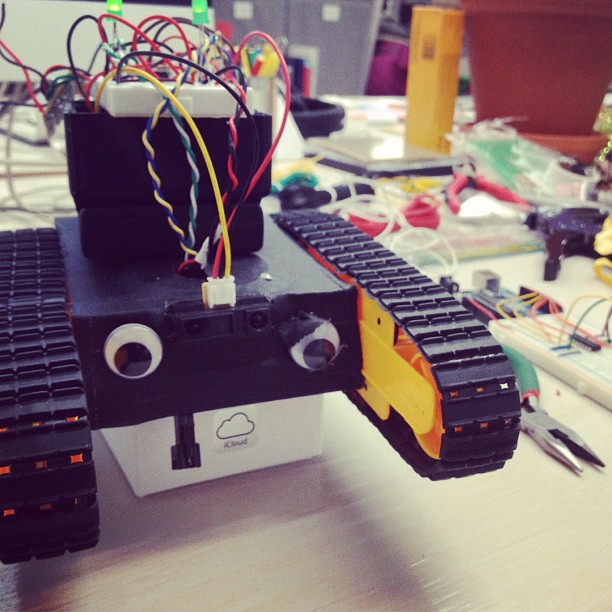 I’m in the middle of moving some sites over from a self hosting VPS to Heroku and had some problems with the text encodings. Everything worked fine on the old site and on my local machine, but after a heroku db:push (copying my local MySQL database to Heroku’s Postgres), all special UTF-8 characters were not displaying correctly.

After some googling and some testing I found this solution (that is, make sure Rails and MySQL is all UTF-8), but it wasn’t enough to properly import the old data. After more googling, this worked for me: 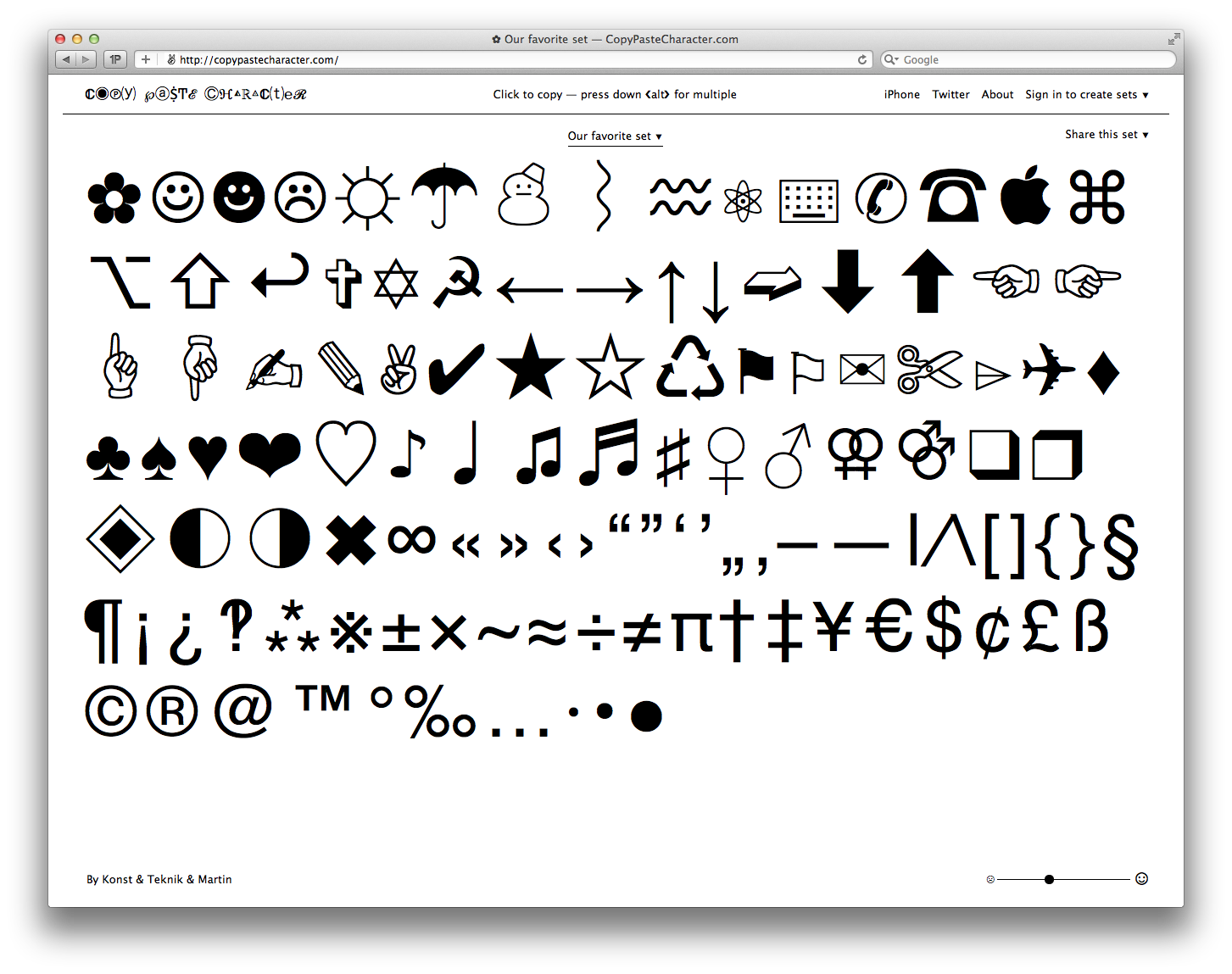 A few weeks ago we (Konst & Teknik & I) finally released the long taking new version of CopyPasteCharacter.com — a website to help people find and copy symbols and characters that are not very easily accessible from the keyboard.

The main new thing, featurewise, is that we included many more characters than the previous version had. More characters has been the top #1 feature request the past three years the site has been online. To make the site easy to use with all new characters, we have divided everything into different sets/collections such as “Numerals”, “Symbols” and “Graphic shapes”.
We also made it possible to create your own set with characters and some smaller things like sharing sets and decide what set that should be the start set on CopyPasteCharacter.com. 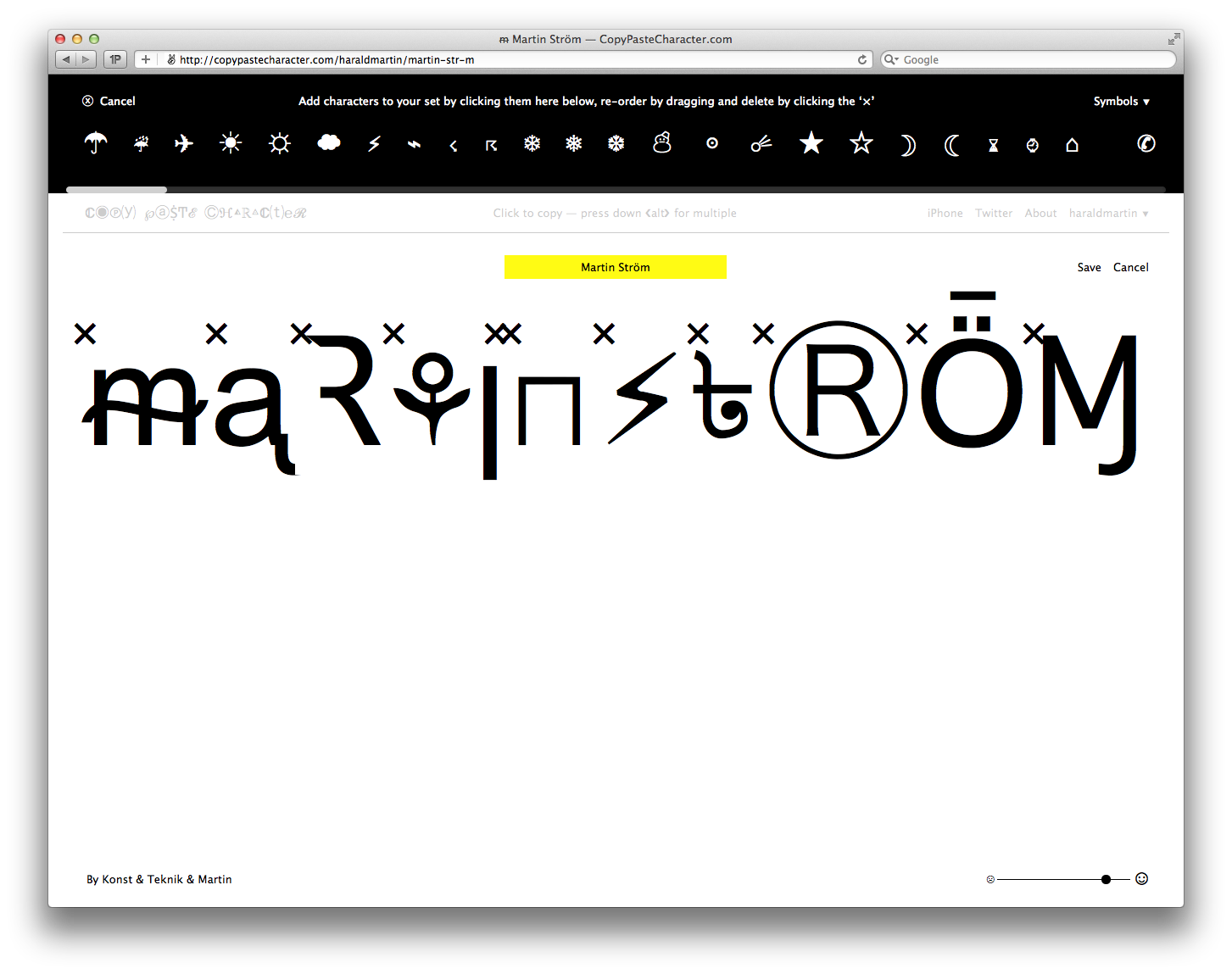 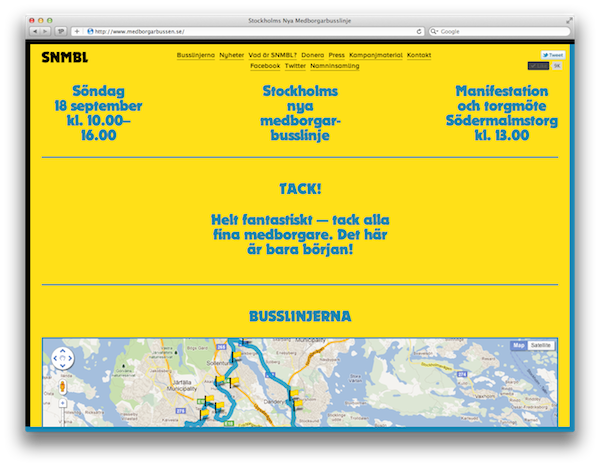 SNMBL is a manifestation against the constant increasing prices in public transportation in Stockholm. The first event took place on September, 18 at Slussen, Stockholm.

Daniel Eskils, together with a bunch of other people documented everything and made a movie from the event (here with English subtitles):

Peter and I did the website for the project and the manifestation. To make it easier to find out where the buses were all the time, I built an iPhone app that tracked the current location of the iPhone and sent it to the server. Then a map on the web page reads the latest reported location and show the bus’s location on the map with all the stops.

Read more about the project on www.medborgarbussen.se — mostly in Swedish though.

ZOMG Update I
InstaCRT is released in the AppStore (and beeing featured everywhere!) ^__^. Read more! 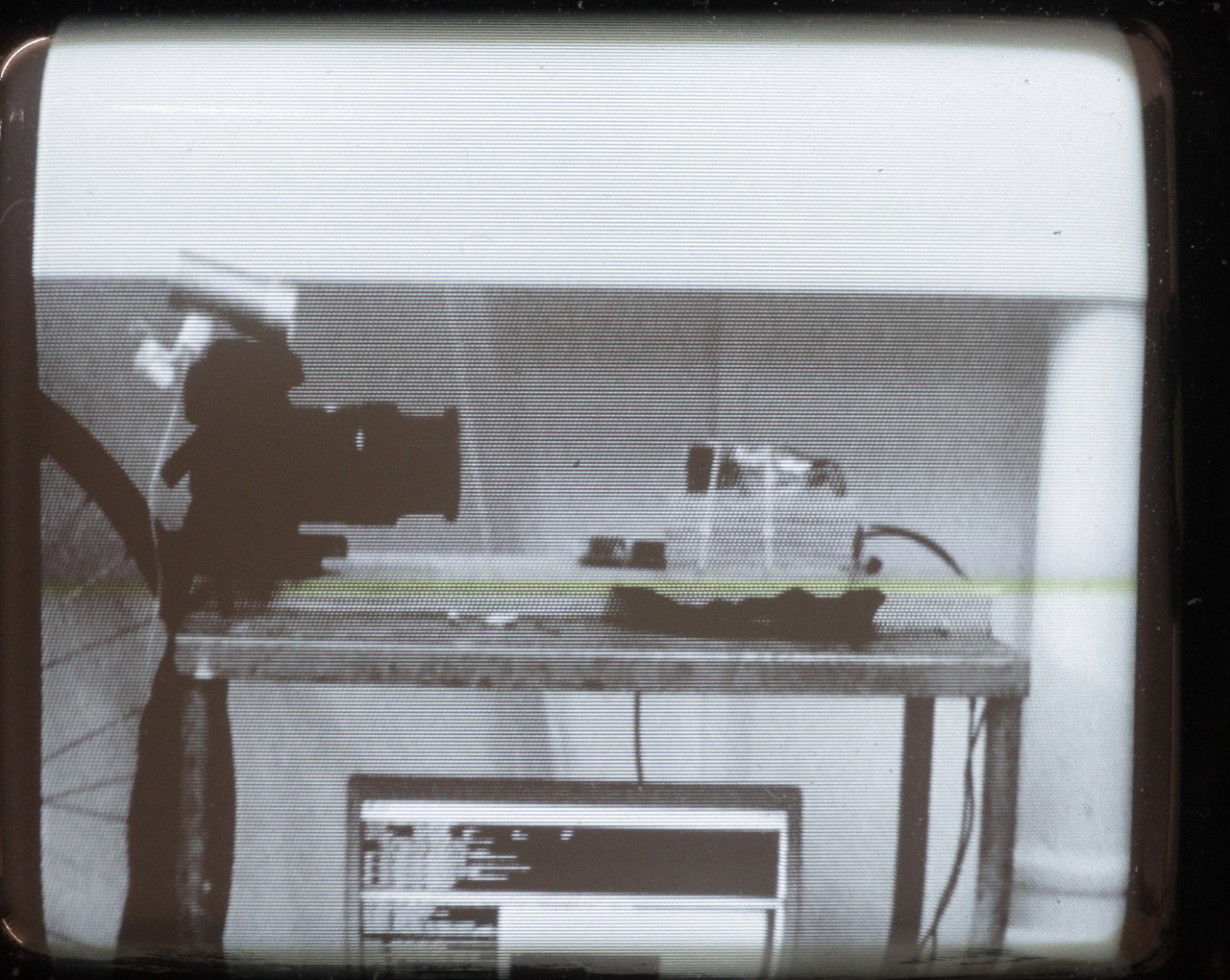 This project started as an idea to see how a “real world” filter for photos (like the popular Histamatic and Instagram apps) would work, except our filter is actually real and not digitally applied.

When I joined the project, Ruben Broman and Erik Wåhlström were more or less already done connecting all the hardware and had the screen working as a regular external screen connected to his old laptop. The same night I hacked together a funny looking Ruby script that fetched images from a ftp server, downloaded them and showed them in fullscren on the old CRT display while a Canon 7D took the photo. We managed to get it up and running the same night and even had time to throw together a quick iPhone application that uploads the photos to the ftp server.

This early version of the project used the Ruby script, Image Capture (built into OS X) and QuickTime 7 to display the photo in fullscreen on the little display. The day after I added a Tumblr uploader so the photos get published on the blog. 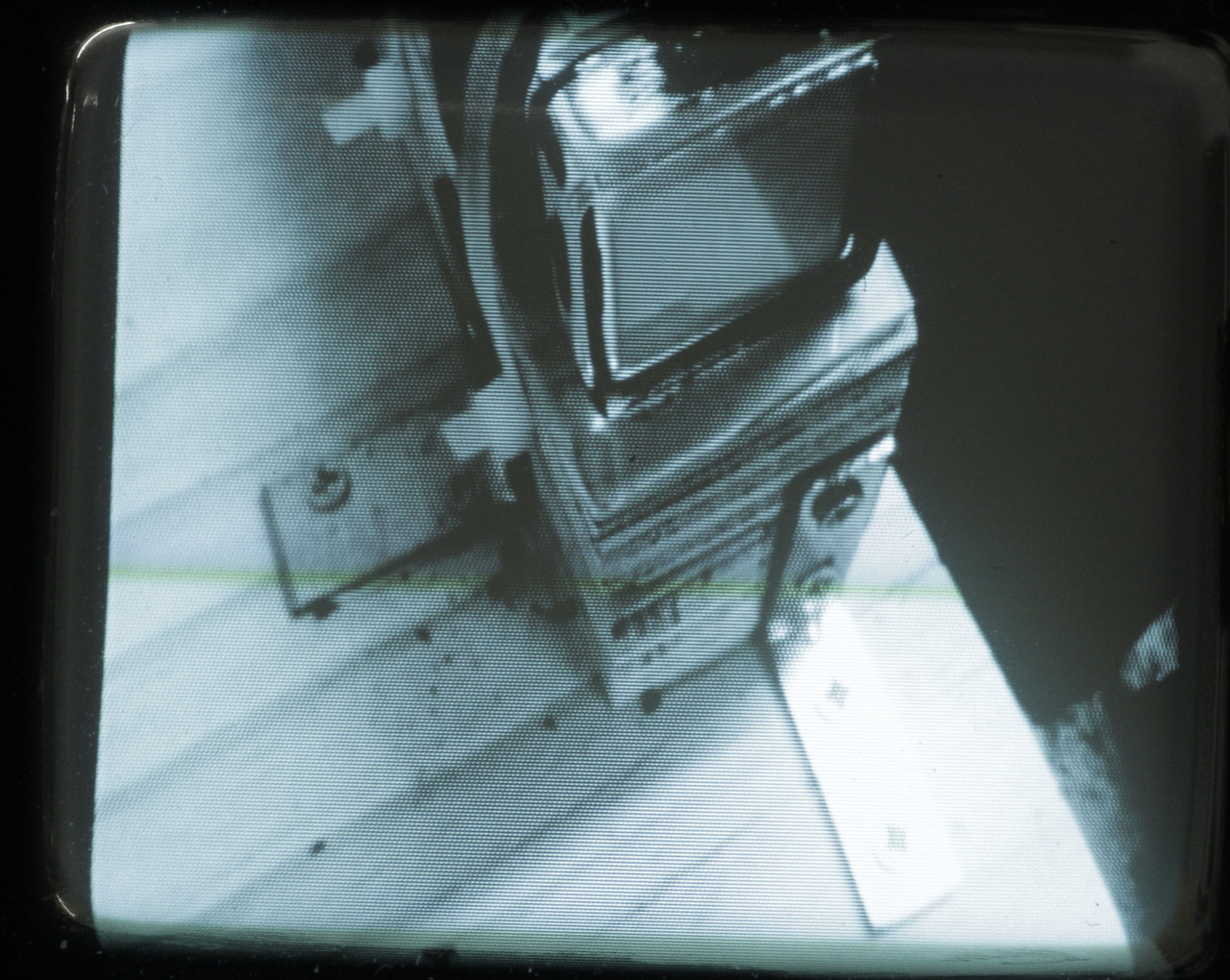 This worked but was very instable so all code was rewritten within the first week it was up and running, mostly for stability but also seperated into different smaller scripts to they could run asyncronysly. We replaced QuickTime with a Quartz Composer project that allowed images to be displayed in fullscreen while not beeing the forground application, and replaced Image Capture with the command line tool GPhoto. Everything was still controlled by Ruby scripts but, as written above, seperated into three smaller classes/files so they could work in parallel, with a main deamon file using Forever The ftp server was replaced with a smarter REST based server to handle the uploading, downloading and archiving of the images.

The iPhone app was also rewritten from scratch to be cleaner and smarter. As of today, about 30 people have the beta (distributed using awesome Testflight).

Except for some smaller tweaks, the current version of the project has been up and running for about a month without restart nor crash so I would say it’s pretty stable now. We haven’t really decided exactly what to do with the project right now. We might release the app to the public and keep it going for as long as it’s possible, or just see InstaCRT as a fun hack. 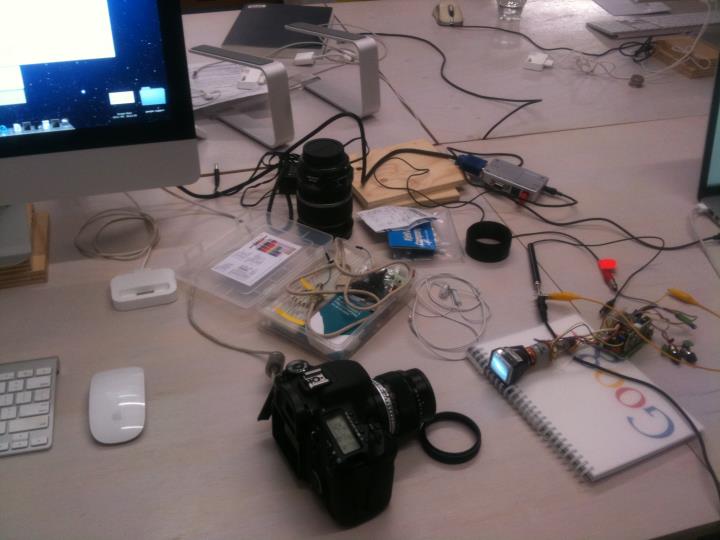 The My Domain Tote Bags! 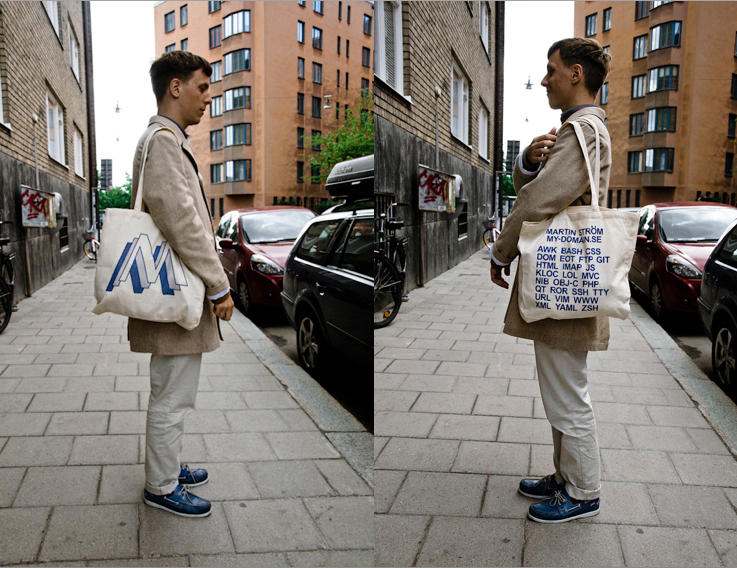 Finally they’re here — The My Domain Tote bags! Most of them are at WWDC in San Francisco right now so if you’re here, grab/ping me (@haraldmartin) for a free bag.

I needed an element with a background to be 100% height and the usual solutions didn’t seem to work for this project. The problem with the other solutions around the web is that they either work when the page is short and without scrollbars, or they just work for longer page (with scrollbar).

A friend reminded me to set the element to display: table;, but said it might now work for IE7. He was right and here’s how to make it work for everyone.

The element I want full height for is .document and the base structure for the html is:

The CSS which works is:

Curated by Pirateturk, organized by Laurel Ptak and hosted by Konst & Teknik & Martin FREE KEVIN is an ongoing and roving screening series from a collection of 15.4 GB of downloaded films and documentaries depicting hackers and related computer culture from the 1980s–2000s. A range of material including blockbuster films, educational television programming, and documentaries produced within the hacking community will be presented in various cities worldwide over the next year in order to stimulate dialogue around issues of intellectual property and open culture. The title FREE KEVIN is an appropriated slogan that was originally used by the hacker community in the 1990s to protest the arrest of Kevin Mitnick, a legendary hacker who at the time was the most wanted computer criminal in United States history. Mitnick’s story is of interest (and depicted in several films in the screening series) for its fascinating particularities concerning hacker culture, intellectual property, and media representation historically, but at the same time it also functions as a contemporary symbol. If anything, the struggle over intellectual property has only intensified in the last decade and FREE KEVIN can be read as the embodiment of resistance in an ongoing struggle for rights and freedoms from corporate and state control in an information age and economy.
Read more

A 1999 film based on the book ‘Fire in the Valley: The Making of The Personal Computer’ by Paul Freiberger and Michael
Swaine. It [...] documents the rise of the home computer (personal computer) through the rivalry between Apple Computer and Microsoft.

A quality documentary about hacking from the 1960s to date. Takes a historical approach, looking at the role of the hacker during this time.

Freedom Downtime is a 2001 documentary film sympathetic to the convicted computer hacker Kevin Mitnick, directed by Emmanuel Goldstein and produced by 2600 Films.

Documentary about the current issues surrounding Hackers/Crackers! What is Illegal should
be called Crackers not
Hackers!!

Hackers is a 1995 American thriller film directed by Iain Softley and starring Angelina Jolie, Jonny Lee Miller,
Renoly Santiago and Matthew Lillard. The film follows the exploits of a group of gifted high school hackers
and their involvement in
a corporate extortion conspiracy. </td> </table>

All descriptions downloaded from Wikipedia and Google Video

Bring your own device and headphones (optional)!

All 29
films from the Pirateturk created torrent file — including the ones not beamed — will
be streamed to Macs/iPads/iPods/iPhones over WiFi during the event. Bring your own device and
headphones and hang out in a corner with your film of choice!

The complete list of films can be found at www.freekevin.info